I was very fortunate to be able to participate in the Second Congress of EUROMEDUC in Bellaria Italy in October, 2009. More than 200 educators, scholars, media professionals and policymakers gathered for three days of discussions, plenary presentations and workshops. Participants from more than 30 countries in Europe attended this important event, which was sponsored by CLEMI (France), Media Animation (Belgium), the University of Algarve (Portugal), and other groups.

One key theme was evident: All across Europe, there is growing momentum for the social reception of media literacy education, with key support from policymakers, politicians and cultural and educational leaders, providing meaningful opportunities for the growth of the field.

Teaching About Media & Teaching With Media 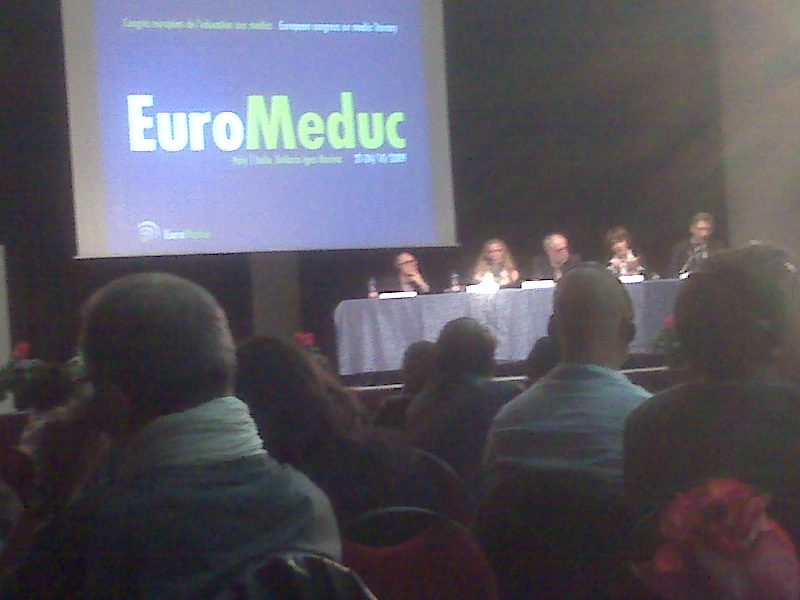 “There is no education that is not media education,” Suzanne Krucsay (Austria) reminded us. Jacques Piette (Canada) says it’s important to distinguish between media literacy and “education through media.” He is concerned that media literacy may lose its specificity if people confuse it with digital learning. However, others are more ambivalent about the dichotomy: Suzanne Krucsay finds that, for educators working in the context of traditional curriculum, the use of educational media can be combined with media literacy to challenge the authority of the textbook and help students understand the constructed nature of all media.

In the context of a traditional European curriculum at the secondary level, critical analysis of educational media can provide opportunities for students to develop media literacy competencies.

Participants offered varied forms of evidence to document the art and practice of media literacy education. This evidence showed that the practices of media literacy education can be transformative as students learn to engage in perspective taking, create messages, engage in inquiry, explore digital media, and participate in genuine dialogue that connects knowledge to action.

Still, some of the longstanding definitional issues surfaced during the conference. Educational leaders and policymakers are still debating some elements of the definition of media literacy education. Policy makers don’t like the term “critical” because it’s perceived as negative—but many conference participants pointed out it’s simply active, reflective thinking and practice. Cary Bazalgette (UK) argued that we need to step away from the term, media literacy and move towards conceptualizing our work as literacy. She argued that we are marginalizing ourselves by the label--- and that moving nearer to literacy educators can be a key agent to improve the quality of overall educational practice.

In many nations, there is a renewed emphasis on technology integration in schools. For example, the Italian Ministry of Education is working to place interactive whiteboards in every classroom. In Finland, the schools have invested heavily in bringing technology into schools. Pier Cesare Rivoltella (Italy) believes that this will result in one outcome: policy makers will discover that technology by itself will not work miracles. He offered ideas about how these strategies can be developed without reducing media literacy education to a set of mere skills or functional competencies. Media literacy educators provide a set of cultural content and pedagogy that connects technology integration to all the subject areas. There is a need to build bridges between media literacy and digital media while recognizing the distinct contributions of each.

As a means to connect media literacy with digital learning, Isabelle Breda (France) wants educators to challenge the uncritical use of technology in schools, which creates an “illusion of transparency.” She encourages educators to focus on increasing the transparency of media tools and technologies, for example, by questioning the forms and genres of online resource materials and teaching about how databases and search engines work.

But some participants are concerned about media industries that use the rhetoric of media literacy to sell software or cell phones. For example, Suzanne Krucsay believes that media literacy educators have been too optimistic about industry’s role in education and there was some debate about the need to find a way to “dance with the devil.” According to Pier Cesare Rivoltella, a position of resistance towards industry’s involvement in media literacy education will not be effective. 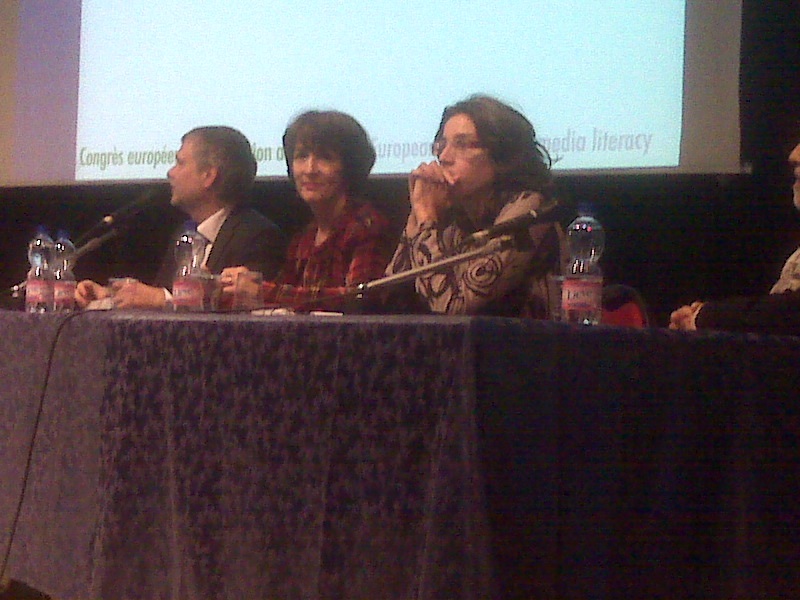 , depending on social context, including the social class backgrounds of the learners.

In assessing media literacy in informal settings, Sezen Digdem (Turkey) offered a presentation comparing the development of an Istanbul film club over a period of eight years. When the film club began, it was a university-school partnership that included both critical analysis and production activities. But by 2009, the program had devolved to a production-only program, with no training support provided for students. As a result, students made bad copies of TV shows and “have fun” videos. More research is needed to develop criteria for establishing the quality of media literacy programs in the informal education sector.

At the EUROMEDUC conference, there were 26 young scholars who offered “fiery presentations” about their research, as described by one senior scholar. These were a mix of theoretical and empirical studies. It is evidence that there is a vibrant community of young scholars working at the intersections of media studies and education all across Europe. Frederic Lambert (France) observed that there are a number of different scholarly disciplines and fields of study represented. In reflecting on the contributions of the young scholars, he wondered if, gradually, the field of media literacy education will develop some convergence in our assumptions about research methodologies, even across our disciplines and fields of study. We can only hope that the next generation of young scholars will lead the way!