Have critical thinking skills been pushed aside in favor of the instrumental skills required for using digital media?

Cable in the Classroom's Frank Gallagher offered an inspirational reminder of how much digital media literacy has gained traction in the United States over the past 5 years. Then LSE's Sonia Livingstone offered a lecture, "From Page to Screen: Critical Reflections on the Prospects for ICT in Education." Here's some of her ideas. 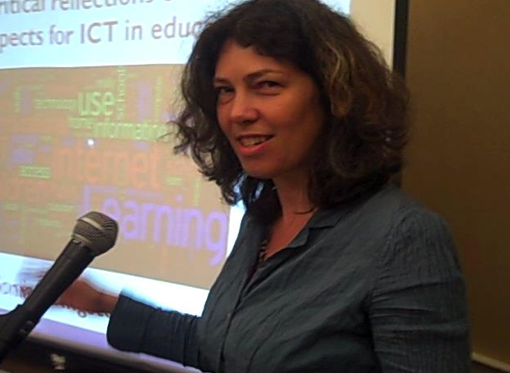 Digital media integrates many media forms, genres and technologies and puts them all on one screen. Like many of us at the National Media Education Conference, she wonders: Have critical thinking skills been pushed aside in favor of the instrumental skills required for using digital media?

The promise of the Internet is seductive. In the UK, Internet materials are being used in some schools, but most schools are not using them well. There are "no profound improvements in teaching and learning," At home, parents are investing in the Internet for their children. The issue of universal access is still meaningful, with industry supporting various initiatives.  Still, many have doubts--- better technology does not mean beter learning.

Problem #1. Does it work? There's not a lot of evidence for the claim that technology transforms learning.  Teacher are focusing on the development of technical skills--- and that takes a lot of time, with a trial-and-error process that is hard to sustain in schools. Asking if technology use will improve test scores or GPAs is asking the wrong question.

Problem #2. What is learning? The promise of technology has been with us for more than 10 years old: it will liberate teachers and pupils, change the relationship between students and teachers. Disaffected students who never blossomed can thrive, developing the playful, social "soft skills" needed for success. Negotiation, discussion, conflict resolution, teamwork, plus analysis and critique. When you see kids learn to compose media, there's a kind of chaos that results-- it can be challenging for adults to bear.  We need new thinking about assessment, but without turning soft skills into a "new and burdensome learning target.  She poses a fascinating question: How radical do we want to be in reshaping the relationship between teachers and students?

We still talk about the Internet as if it was an neutral medium. The Internet is not necessarily motivating to children. "We look up stuff when the teacher is not looking." Children like to play-- trial and error learning is comfortable to them. The Internet feels easy to use, but children and teens are discovering that the Internet has unreliable information. Thy may rely on "big brands" like the BBC or make use of superficial colors, typefaces and fonts to make decisions about they like and trust.

What's really going on? Investigating claims against evidence is difficult--- I wonder if the big technology companes are shaping the discourse of the field.  There are many high visibility stakeholders who defend the use of technology. No large scale longitudinal studies have been conducted.

How can it be explained? What is the Internet doing to people and to society? How are our lives shifted and transformed by technology? How do children learn?  Do we expect new media to support traditional learning goals or create new goals?

How could it be otherwise? Technology reflects the unequal power relationships in society so we must explore: whose interests are served by ICT technology? We spend lots of money on hardware, less money on software and zero money on teacher training. Children are using the Internet for games and entertainment--- we need to transfer the critical analysis skills used to analyze mass media to the Internet.

Will schools be able to transform themselves in light of the changing nature of knowledge?  The weight of tradition is overwhelming. Will the fast-paced and ever-continuing development of digital technologies further divide the rich and the poor?

I asked Sonia about whether the research game was "fixed," in a way, because of the way in which the technology companies have supported the field's development. Did it really matter that the research evidence to show technology's value has not been established?

I also asked Sonia about the issue of Internet addiction. There are differential levels of concern about this in across different cultural contexts--- it gets high visibility in South Korea and Japan, and less attention in North America. Some people are worried about those whose use of screen media may interfere with other aspects of social life--- and some are not. Sonia pointed out that policymakers are not concerned because there is not a "policy tool" to address the problem.  She says: the Internet is not causing this problem-- children's overuse of media reflects larger issues.  Plus, her kid was a heavy user and he turned out OK.  In my view, the topic of "media addiction" is important to the media literacy education community, because we want to promote self-awareness and reflection about media and technology habits and behaviors. It's worth looking at how this idea is positioned in the news media... the US culture's technology-worship tendencies need careful and critical scrutiny.