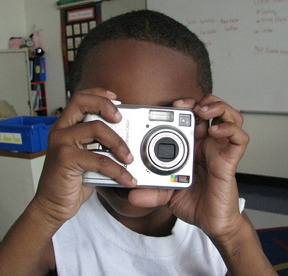 Yesterday, July 6th marked the first day of the Powerful Voices for Kids summer camp and Teachers Institute at Russell Byers Charter School. We welcomed over 80 students and 23 teachers to the camp and played games, exercised their minds and bodies, and learned a little more about one another.

The camp is split into eight groups, ranging from kindergartner's and first graders to sixth and seventh graders, in the Summer Scholars program, which actually started last week.  They quickly became filmmakers, documenting the community building group meeting with Flip Ultra camcorders, which all of the kids will be using this summer to express themselves creatively and practice new forms of communication.  The energy level was very high with the staff for Powerful Voices and that trickled down to the students, as there were many exciting discussions and activites completed throughout the afternoon.

The teacher institute had many highlights, with a group activity reflecting on the teachers' "Love/Hate" relationship with images, sounds, print, and digital texts, trying to think from the perspective of all their different roles in society, as an educator, family member, and then followed that with an overview of the key concepts of media literacy to learn to deconstruct media texts.  After lunch, they did a video scavenger hunt and were introduced to the kids in Powerful Voices for Kids.  It was especially exciting for the teachers participating from Russell Byers because they could see their students in action.

This week will be very fun and exciting, and we are looking forward to thinking about some big ideas and moving closer to becoming more effective communicators.