Patrick Johnson and Erik Sakamoto, youth media educators at Youth Radio in Oakland, California, offered a day-long program, “Sports and Media Literacy” on Saturday, September 19th, 2009 at Temple University.  The program, “Health and Fitness Beat,” was developed through a grant from the Robert Wood Johnson Foundation.  This new program engages young men of color in critical inquiry and reflection around a number of controversial topics in sports. The program uses principles of media literacy to address specific health-related issues with young men of color, including relationships, body image and sexuality. 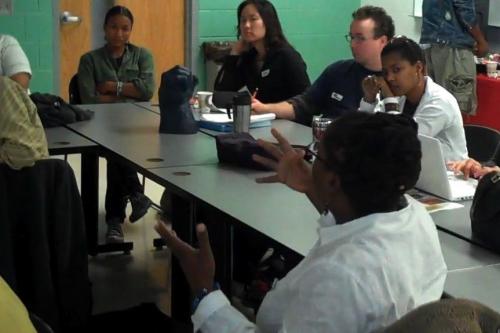 •    building awareness about health issues that are relevant to young men of color
•    increasing comfort in discussing sensitive topics, like sexuality, violence and homophobia
•    developing critical thinking and communication skills

Among the 25 attendees of the September 19th program at Temple University were high school students and young adults participating in alternative education programs in the city, as well as Philadelphia educators who work in both formal K-12 and afterschool programs. There were a number of Temple University students and graduate students – some from as far away as Ontario, Canada.

Erik Sakamoto contextualized their work at Youth Radio. This program was developed specifically with incarcerated youth.  Participating students came from a Camp Wilmont Sweeney, a juvenile detention center in Alameda County, California.  It’s a community with the highest rate of reoffending juveniles of any state in the country. More than 90% of the "graduates" of California's youth incarceration system are rearrested within three years. These kids come from neighborhoods with a high incidence of community violence, drugs and crime, where chronic unemployment is the norm.   East Oakland has the highest rates of sexually transmitted dis 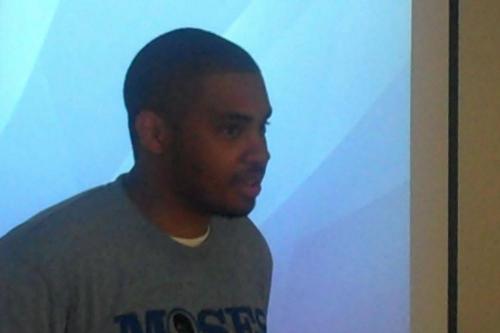 eases in the country. In every sense, young people participating in this program are not only perpetrators of crime—they are also victims of a dysfunctional culture.

Plenty of Philadelphia students could relate to these challenges. One participant said, “Growing up—it’s what I see every day, if someone gets shot, we see it as regular. We have to make a change in the way we see things.” Another said, “The mentality of being inside the ghetto can keep you strong. But if you hold on too tightly to that mentality, it’s not going to get you anywhere.  You can keep the strength, but don’t let that limit you.

Hypermasculinity: Getting Below the Surface


To explore how health and lifestyle issues connect to discussions about sports, we explored the concept of hypermasculinity, a psychological term for the exaggeration of male stereotypical behavior, such as an emphasis on strength, aggression, and virility. Marginalized communities of men may display attributes of hypermasculinity, especially when they experience oppressive conditions that “keep them in a box,” interfering with the ability to express their uniqueness and individuality. 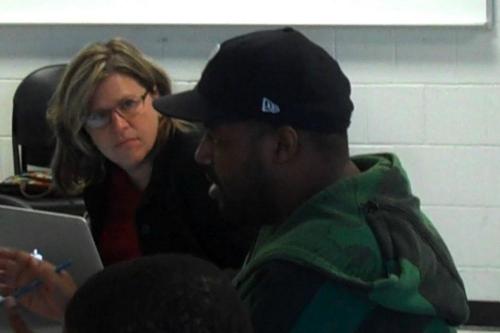 We discussed a college football player, LeGarrette Blount, who shocked the football world earlier this year with a blindside attack on an opposing player after the Oregon Ducks' upset loss to Boise State. Blount sucker-punched Byron Hout after being taunted. The event was played over and over on the jumbotron in the stadium. Banned from the team for the season, he became undraftable and the event effectively ended his career.

Football is a profoundly violent sport. Players’ bodies are destroyed, and their life expectancy is shortened as a result of playing the game. In the United States, the average life span for NFL players is 55, more than two decades less than a typical male.

But athletes’ attitudes about aggression can be even more dangerous than the physical demands of the sport. When young men feel invincible, their response to threatening situations can be highly inappropriate.  In Blount’s case, his response ended his career. In other situations, an aggressive response can lead to ending a life.

We then watched a clip about Vernon Forest, a world champion boxer who was killed during an attempted robbery while filling up tires on his car.  Charles Watson, the boxer's manager, said police and witnesses told him that Forrest had stopped at a gas station to put air in his car tire when a man approached asking for money. Forrest's 11-year-old godson was with him.

Forest had his wallet out and a guy snatched his wallet and started running. Vernon pursued after him. The guy turned the corner and Forest didn't see him. He turned around to go back to the car. That's when the firing began. 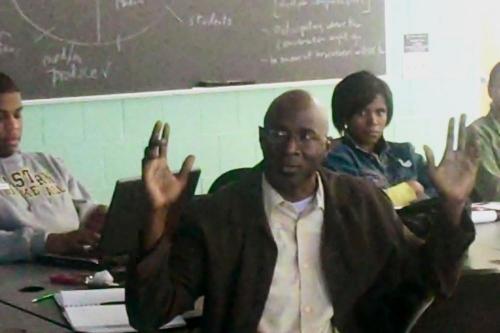 Patrick Johnson asked, “How many of you know folks who probably could have been alive if they had not reacted to a situation in a certain way?” Hands went up all over the room.  Sam Reed, a Philadelphia middle-school teacher said, “We don’t celebrate when kids make choices to NOT retaliate.”

Another teacher said, “How many times have we seen two kids get into a fight and the parents walk the kids back into a corner and continue the fight? We see that this is a generational transfer of hypermasculinity.”

A high school student shared a story, explaining, “One night, a person tried to get my wallet.  I tried to fight him off. I got a scolding from my mom. I defended myself. But my mom and brother said, ‘You can never get your life back. ‘ But my pride was hurt.   I wondered: Am I a punk?”

Patrick Johnson responded by explaining how many of our ideas about our own identity are shaped by media messages, often without our conscious awareness.  Young men often feel invincible. Sometimes, they feel that their death is inevitable. Boxers experience these feelings just as a part of putting themselves in the ring each day.  But the same mentality in the real world can be dangerous.  As Johnson put it, “When I define myself as tough because I’m from this project or I’m from this neighborhood, I limit myself.  We have to challenge this--- we have to flesh out all our identities and respect them all. In the case of Vernon Forest, he was not only a boxer, a world champion, and from Atlanta.  He cared about the people in his community.  He was a father and a godfather.“  But some identities trump other identities because of the power of media representations.

The Connection between Sports and Hip Hop


Hip-hop celebrates another kind of masculine ideal: one who is flashy, displaying power, money and women. One who brags about himself, maintains elaborate rivalries, and puts others down. Johnson asked the group, “How do hip hop and sports inter-relate?” 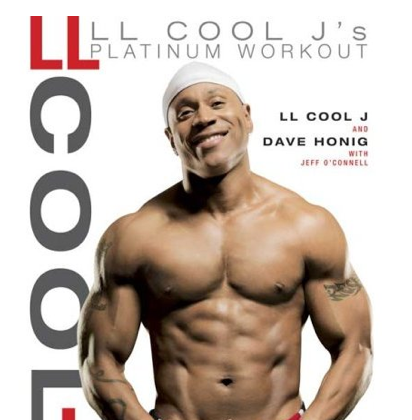 One student raised his hand, saying, “Little Wayne made a whole song comparing himself to Kobe Bryant.”  Another participant explained, “If you see Jay Z liking Lebron, you will like Lebron.”  An educator pointed out, “They’re both black—they have similar life stories and can relate to the struggle for success. Plus, consider the stress, clutch moment, the pressure--- rappers and ball players have this in common. Rappers couldn’t play ball, but they used other skills: talking, posturing, carrying themselves like a ball player.”

Patrick explained that historically, sports and entertainment were the first opportunities available to black men in mainstream society.  In both cultural worlds, spectators and fans don’t usually see how much work, how much practice, how much effort is involved in getting to be good at the craft.

Instead, the focus is on looking flashy—and that’s what’s considered valuable. Johnson explained, “Both the world of hip hop and the world of sports has told us that looking good is important. Having a flashy look --- but does that really work? What are the consequences of a focus on this?"

We discussed the case of Alan Iverson, a talented player with a complex reputation for flashiness, both on and off the court. As one critic wrote:

In order for Iverson to be at his best, he needed to surrounded by inferior talent. He needed the ball, and he needed everyone else to play defense. And at his absolute apex, when he was surrounded by the perfect mix of players, he could only take a team to the doorstep — not all the way to a championship. For all the reasons Iverson was a joy to watch — his desire to take every big shot, finish every drive at the basket, initiate contact on every play, and wear his heart on his sleeve — his decline as a player hasn’t been fun to watch. He’s going out shooting, and his body is wearing down. His pride prevents him from making the transition to a role player, and as a result, he makes teams worse with his me-first approach.

After showing a highlight reel from ESPN, Patrick Johnson explained, “The top plays in ESPN sports center--- they are all over-the-top, bizarre things.  From the media, we know a lot about marginal players who do wild things--- that’s what gets attention.  When the culture emphasizes that, for young black males, it’s all about getting attention, those messages will have an effect on making responsible choices in everyday life.  Asking a rhetorical question, Patrick Johnson asked, “Why is there a need to dominate and embarrass and put down others? How much of that, from a male perspective, do we buy into? And where does this lead? What are the real-world consequences?”

The Pedagogy of Media Literacy

Participants experienced how viewing and discussing video clips about sports created an opportunity for sharing meaning and reflecting on attitudes, values and behaviors.  When participants offered their reactions and interpretations, they also shared pockets of expertise—in music production, computers, BMX biking, skateboarding, and many more topics and issues.  Everyone in the room benefitted from this sharing. One participant said, “When we share what’s important to us, it helps make a connection --- where each person has special knowledge that opens up conversations. This lets us understand people who might be different from us in gender, age and race. “ 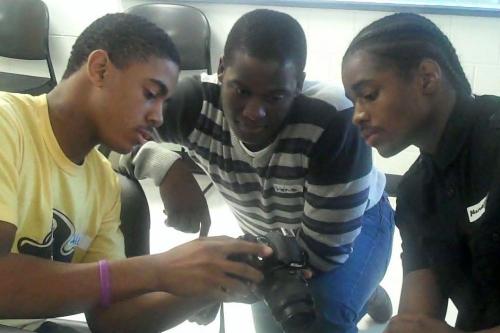 Media production is another important part of the program.  Just having microphones in the room makes a difference, according to Johnson. Students take the work very seriously. In the program students are responsible for creating an individual audio commentary -- -an opinion piece with a personal perspective.

Patrick Johnson revealed that it’s not always easy to get incarcerated young men to write commentaries.  He said, “Kids have been conditioned to get the work done… it doesn’t have to be great.” But with Patrick as the editor, his strategy is simply to ask questions--- questions that need to be answered in the writing itself.  “They add the answers to the new draft, and this deepens the writing.”  In the process, students discover that revision and editing are not about some artificial ideas about “good writing.” Revision and editing are what happens when we think carefully about the relationship between the reader and the writer.

As Johnson understands it, the writing experience is a vital part of the program’s success. “They will need to be self-advocates in their careers,” he said.  “To write a good commentary, they have to take a stance, and that’s not always easy for them.”

When they perform their commentaries to create an audio piece, “We watch as they become proud of what they have written.”  It’s a satisfying job, Johnson acknowledges. “Trust is an important part of this program,” Patrick Johnson explained. “Sports is an umbrella for dialogue than enables us to listen to each other, to respect each other, and to explore the causes and consequences of the choices we make in life.”