Sports and Media Literacy - My Thoughts 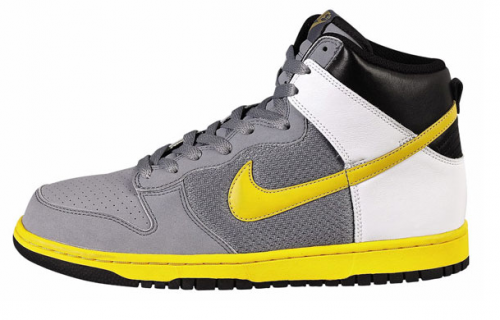 It was questions such as this one that started most of the discussions at the Sports and Media Professional Development Program at Temple University on September 19th. This specific “Didn’t Bo know, first” question was asked during a debate concerning the original “Air Jordan 1” marketing campaign, which was the infamous shoe worn by then rookie Michael Jordan, and the “Bo Knows” marketing campaign that was created for Bo Jackson, who played in both the NFL and the MBL. During this particular debate, I have to admit I was a little lost—and I considered myself to be pretty well-versed in sports. But I realized very quickly, my “vintage sports” knowledge needs a little work.

Even though I didn’t recall which ad campaign came first, I did remember that the entire “Air Jordan” marketing campaign originated after Nike realized its sales were struggling. Reason being, Nike was not considered a reliable basketball shoe before Michael Jordan. So while the men continued to debate over which ad campaign came first, I thought of a parallel between the Nike situation and this Sports and Media Literacy program. During the early eighties, traditional marketing was no longer working for Nike, so they needed to adjust. Nike’s change included a new, somewhat radical, advertising campaign create solely for the rookie Michael Jordan. Thinking outside the box really paid off for Nike because as I write this, Nike continues to reap the benefits of that gamble.

Just like Nike, Patrick Johnson and Erik Sakamoto, the presenters of the Sports and Media Literacy program, also realized that “traditional” curriculum would not work for the students they served. The two responded by creating a new, somewhat radical, curriculum that could—teach and speak—to their students. Now let’s just hope they experience the same success as Nike. (By the way, the “Bo Knows” campaign came after the “Air Jordan 1”). 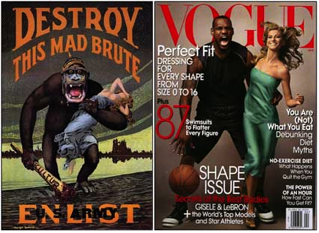 Sports connoisseur or not, everyone had an opinion after these images were displayed. The majority of the Sports and Media Literacy participants agreed it was a loaded image, to say the least. However, other perceptions were quite diverse. For instance, one particular participant believed Annie Leibovitz, the photographer responsible for the cover, didn’t intend to create any ill-will. Others believed Leibovitz used the cover as a catalyst for racism, and some people, myself included, blamed Lebron James for being “generationally ignorant.” I was not surprised by any of perceptions, but I have to admit, I was jarred by one Black participant who stated that anyone who thought the Vogue cover was racist was suffering from “Black Paranoia”.

In conclusion, it does prove that one’s perception has a lot to do with their culture, lifestyle, and beliefs, which is something that I often see in media literacy. In addition, it was a very enlightening debate, but it was very disheartening to hear some of the youth’s responses in reference to certain perceptions and generalizations that are forced upon them on a daily basis.

Did Hypermasculinity Play a Role in the Death of Vernon Forrest?

In July 2009, Vernon Forrest, a professional boxer, was shot to death after he chased after potential carjackers. His death was at the center of our “hypermasculinity” discussion as we tried to determine if his death was preventable. The majority of the group, youth included, believed his aggressive behavior and his perceived ego caused him to run after his killers, which ultimately cost him his life. According to Forrest’s manager, the boxer would never allow anyone to just “take anything from him”. But in the end, he did allow someone to take something from him, his life. This particular dialogue clearly revealed the link between sports, hypermasculinity, and one’s lifestyle and the discussion turned out to be very engaging to everyone involved.

I believe the youth gained the most from this portion of the program because it is something they struggle with on a daily basis. A few of the youth even thought they would have reacted the same way that Vernon Forrest, but Patrick followed the youth’s hypothetical notion with one simple question, “Where would that lead?” The only answer he received was dead silence. However, the unanswered question caused the discussion to venture into the importance of teaching youth how to deal with emotions. Reason being, if young men learn early how to productively deal with emotions they will be able to make rational decisions throughout their young, and hopefully, mature lives.

Food for Thought
There was plenty of food for thought to be had concerning critical thinking, masculinity, health, sports, etc. etc. However, the statement that really rang true for me was when Patrick said, “Sports is not just sports”. In fact, one of our “take-aways”, as Dr. Renee Hobbs calls them, was how sports can be used as an umbrella for dialogue. So very true.