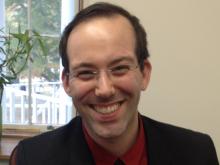 Yonty (Jonathan) Friesem is the Co-Director of the Media Education Lab and an Associate Professor at the department of communication, Columbia College Chicago. Yonty received their PhD from the joint doctoral program in education at the University of Rhode Island and Rhode Island College. Yonty is an award winning educator and filmmaker who advocates for media literacy education. For the last twenty years, Yonty has worked with a number of youth media organizations, universities and colleges in Israel. As part of his educational work, advocacy, and research, Yonty have presented at international conferences in Oxford, UK, Turku, Finland, and Guangzhou, China. In October 2010, Yonty was a visiting scholar at the Media Education Lab. The collaboration with Dr. Renee Hobbs and the Lab students led them to pursue their PhD as Hobbs’ advisee.

Research. Yonty is developing a measurement tool to explore the skill level of students who produce media as civic engagement. They are the editor of Youth Media Reporter - an online open-access publication for media educators to be relaunched in January 2023. In 2017, Yonty was the guest editor for JMLE special issue on Media Literacy and Disability. Their first book published in September 2022, Routledge Handbook for Media Education Futures Post-Pandemic convey 57 chapter with case studies of 27 countries across the five continents during the 2020-2021 COVID-19 pandemic.

For their dissertation, Yonty explored how eight elementary school teachers integrated media production into their practice. Mapping the practice of media production of full time elementary teachers help him advocate for a deeper implementation of media literacy in the public schools. Yonty is using cognitive and affective components of empathy as a psychological and sociological measure of youth interaction in an out of school program.

As part of the Summer Institute in Digital Literacy Yonty examines how media production advance leadership skills of media literacy teachers. For four years, Yonty evaluated the First Star URI Academy program using quantitative and qualitative measurement to assess students’ academic performance. Their paper was awarded Top Student Paper in Applied Communication at the 100th annual National Communication Association conference in Chicago in 2014. Yonty initiated many curriculum evaluation projects in Israel such as the Supportive Filmmaking Program, the Photo-therapy Department at Musrara School of Art, online Israeli Cinema Studies at the Open University of Israel, the Department of Film and Communication at the Ministry of Education, and developed a historical review of the occupational therapy curriculum in the Israeli higher education. Some of the case studies include a youth media initiative called GiveMe5 produced by RISCA (Rhode Island State Council on the Arts) including students with disabilities; a research project on the nonviolence and conflict management skills learned by producing media with Friends Forever.

Teaching. Yonty is teaching undergraduate and graduate students. In the classes, the students work in groups to produce multimedia for social change. By developing digital and media literacy skills, the students learn to be active citizens of the 21st century. Students produce various media as part of their training to become media professionals. Yonty is also a Quality Matters Peer Reviewer for graduate online classes. They use webinars to expand his outreach to various communities around the world. Since 2014, they have offered webinars on digital empathy for the Global class in Durham College, Canada and the video therapy program at the Supportive Filmmaking Program. Yonty coordinates and host the series on research design in media literacy for the National Association for Media Literacy Education (NAMLE) as a member of the Leadership Council. After receiving a special grant from the Open University of Israel in 2008, they created online platforms for media classes.

Yonty started as a videography instructor for the "Together" Project - using art to create empathy between Arab and Jewish children in Jaffa, Israel. After receiving a special grant for the guidance of youth-at-risk from the Steinhardt Foundation for Jewish Life, they decided to enter the formal education system. Between 2001-2008, Yonty specialized in teaching media literacy with special populations such as students with learning disabilities, students with behavioral and emotional problems, mentally challenged students, gifted students, and youth-at-risk. Yonty was a homeroom teacher at Yehud Comprehensive High School, while teaching in five different high schools. Yonty's students won many awards for their short films such as Yad Vashem Educational Prizes, Wim van Leer best film award for high school students, First Prize for Documentary Film - Dimona Short Film Festival, Contribution to the Community Grant from HOP TV Channel and the Ministry of Education, and Outstanding Contributions to Society Award from the City of Rehovot and "Metsila," the Israeli Anti Drug Abuse Foundation. Since 2007 Yonty has been teaching undergraduate students at the Open University of Israel, Tel-Aviv University, Central Connecticut State University, University of Rhode Island, and Temple University, as well as in different colleges such as Camera Obscura, Ma’aleh School of Television, Film, and art, Oranim, Academic College of Education, and the Academic college of Society and Arts.

Educational Leadership. Besides their work as the associate director of the Media Education Lab, starting in 2014, Yonty serves as a faculty of the Summer Institute in Digital Literacy providing educators tools to use media production in order to foster learners' cognitive, emotional and social skills. In the last six years, Yonty produced many local, national, and international conferences such as the Summer Institute in Digital Literacy, The 12th Northeast Media Literacy Conference, 2014 International Association for Intercultural Communication Studies, Digital Engagement 2.0, GiveMe5 teachers' Lab.

Yonty Back in Israel, they were head of the cinema and communication department at Ferkauf High School from 2001-2004, and the head of the cinema and communication department at Yehud Comprehensive High School from 2004-2008. Yonty was a web manager of the Israeli Cinema studies website, and the Open University online Israeli media literacy teacher website. They collaborated with RISCA, RIIFF, VSA Art RI, and Adoption RI, to bring media literacy to special populations in the state of Rhode Island. Nationwide, Yonty worked on the educational outreach as well as coordinating research groups for Project Look Sharp, PBS news Hour Student Reporting Lab, and First Star URI Academy. Between 2013-2016, Yonty has been working with the executive director of VSA Art RI, Jeanine Chartier. Together, they received a grant for $31,000 for equipment and professional development in the Central Falls public library. In 2014 and 2015, they received a $20,000 grant from the Washington D.C. Kennedy Center to hold a professional development workshop for more than 200 in-service and pre-service teachers in Rhode Island, teaching Universal Design for Learning (UDL) and digital literacy.

Workshops. Yonty offers many professional development workshops for educators and administrators who are interested in implementing technology in their classrooms. As Faculty and producer of the Summer Institute in Digital Literacy, Yonty works with educators to promote digital and media literacy skills to become mentors in their educational settings. With their model of media production integration, Yonty advocates for the creation of a  sense of shared goals, enhanced sense of mastery, and reassurance to be autonomous in order to integrate digital and media literacy practices.

Curriculum Development. Being a leading media literacy teacher and as an advisor to the national curriculum committee in Israel, Yonty developed many curricula for high school students in communication studies and film/media studies. They developed many new courses and graduate programs at Columbia College Chicago to implement civic media into the media studies curriculum. At the Harrington School of Communication and Media, they developed a curriculum for Film/Media 101 course, Nonviolence in the Media, and special topics in Media Production FLM 351. For First Star URI Academy and in collaboration with VSA Art RI, and Adoption RI, Yonty Friesem and Kelsey Greene developed a media literacy curriculum of videography and social networks courses for special populations such as foster youth, and youth-at-risk. Between 2014-2015, Yonty worked with the literacy and math coach in Narragansett Elementary School to develop digital and media literacy curriculum for preK-4th grade aligned with the Common Core State Standards.

Filmmaking and Media Production. During their film studies, Yonty worked as a local news reporter and was an executive producer in the Israeli Educational TV Network for two years. Yonty directed five short films, and produced six. After winning the best short film award for his co-production of Mur’alim, they joined the feature production ‘Yeladim Tovim" as a co-producer. The award winning film was chosen by the New York MoMA to be featured in a retrospective of queer films from the last fifteen years. Between 2006 and 2008, Yonty produced the National Dimona Festival for Youth Media Production, which featured 400 Israeli high schools short film contest and offered a three-day workshop for 3,000 students. Between 2013-2015, Yonty produced and directing short videos for the Media Education Lab and the Harrington School of Communication and Media. In 2015 they collaborated with RISCA and the RI Film and TV Office to produce a documentary about GiveMe5.