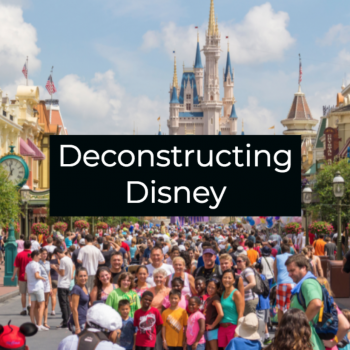 This fun intergenerational workshop explores what we love and hate about Disney films, characters and brands from the past and present. If you’re a kid, teen, parent, educator or anyone who works with youth, you will learn how people’s knowledge, beliefs and attitudes can be harnessed and expanded for deeper learning through simple instructional strategies. Discovering how talk about popular culture provides a great opportunity to spark and activate critical thinking, creativity and social action. This curriculum features seven activities appropriate for all ages and a list of additional resources.

LEARNING OUTCOMES: (will vary with audience and available time)

Teachers and librarians will:

Set the stage by playing a montage of Disney films to activate prior knowledge. Then use one or more of the following activities to stimulate discussion and dialogue.

Who is your favorite character? Describe the character and explain why it’s your favorite. Take-away message: People interpret media messages differently and identification with characters is a key pleasure of the viewing experience.

Review slides and then discuss: Should we be concerned about the scope of the Disney empire? Why or why not?   Take-away message: As the 2nd largest media company in the world, the Disney empire shapes people’s experience of childhood, a profound power that comes with great social responsibility.

How many of us own something branded with a logo from the Disney empire? What kinds of feelings might be activating by owning and using Disney-branded products?

Take-away message: People buy branded merchandise for the pleasurable feelings, not the products themselves.

Select a Disney clip to analyze and use five questions to critically analyze the content and format:

Each participant receives a character card and tries to explain the character to someone else. Trade cards with someone if you’re not familiar with the character. Then identify four corners of the room with the categories: hero, villain, helper and victim. Participants move to the corner and explain why they’ve selected this category, noting similarities and differences between the characters.Take-away message: Stereotypes are part of storytelling and may also influence how we see people in the real world.

Using the character cards, describe the essential conflict of a Disney film to someone else. What is the primary question or conflict that the character faces? Alternate activity: compose a fun way to communicate your opinions of the conflict in the form of meme. Take-away message: Conflict is an essential element of storytelling and people may perceive narrative conflicts and themes differently.

Participants stand up and are shown an imaginary line that ranges from “strongly agree” to “no opinion” to “strongly disagree.” They move to a point on the line that represents their opinion each statement below is read aloud.

Take-away message: People’s attitudes about Disney are based on a number of complex factors and it is important to respect and understand the wide range of attitudes that people have about this important part of our culture.

BEYOND THE FILM | ADDITIONAL RESOURCES

Select from the following resources to complement the workshop and inspire further discussion or programming:

35 Disney Sidekicks by Lindsay Kupner. Downloadable gifs of the characters can be used for the Question, Conflict or Meme activity

DVD EXTRAS. The Extra/Bonus Features available on DVD Disney films contain treasures for film and media literacy education. They include: