NBC10 in Philadelphia brought a news camera to visit the Powerful Voices for Kids program this summer and discovered that children are taking flash mobs very seriously. But what children discovered was that television news is not a window on the world. Because of the speed and brevity of the reporting process, inaccuracies and distortions occur. Many voices and points of view are omitted. 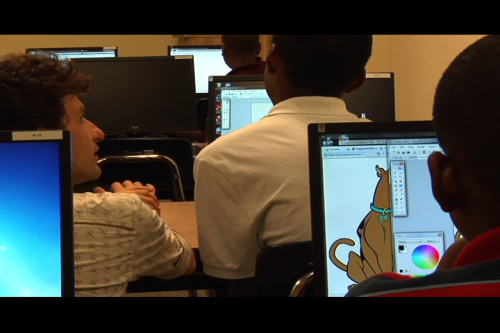 As part of the Powerful Voices for Kids program at the Russell Byers Charter School, a group of fourth, fifth, and sixth graders have been learning about the power of social media, which they recognize as a tool that can be used for good and bad.

Powerful Voices for Kids instructor John Landis is one of 13 instructors in the program who has been exploring news and current events in relation to digital media and technology. After reading articles about recent events in Philadelphia and Washington DC, Landis said, “Students reflected on choices made by flash mob initiators. They also considered the decisions made by the participants and the police, and explored the choices made by newspapers and TV news in covering the event.” As part of this project, children are make simple videogames to depict the choices and consequences of flash mobs, using an online videogame production tool easy enough for children to use. Stay tuned to this space as we will be chronicling how the children react and respond to the news story about them and how instuctor John Landis uses the many teachable moments that surrond this experience.

More than 85 children from 41 neighborhoods in Philadelphia are participating in the Powerful Voices for Kids program, which has launched its second year as a program of the Media Education Lab at Temple University. From July 5 – 30, kindergarten through 8th grade students are beginning to look analytically at the messages of mass media, popular culture, and digital media.  They also get to create their own media messages, which include comics, radio programs, video documentaries, stories, advertisements, and even videogames. For example, students are responding to celebrity culture narratives about fame, using the case of athlete LeBron James to explore how teens talked back to the media by sharing their opinions about his career choices.

“Children today have cell phones and they are active media consumers, spending more than 10 hours per day with screen media. As a result, they get a lot of complex and often conflicting messages from contemporary media and technology,” said Renee Hobbs, the director of the Powerful Voices for Kids program and a professor at Temple University’s School of Communications and Theater. “The program is designed to strengthen children's abilities to think for themselves, communicate effectively using language and technology tools, and use their powerful voices to contribute to the quality of life in their families, their schools, their communities, and the world.”

Educators got into the act as well. During the week of July 19 – 23, more than 70 educators from across Philadelphia and around the nation attended the OPEN DOORS PROGRAM, a staff development workshop where teachers learn how to bring Powerful Voices for Kids to their own schools and communities.  An online community documents their experiences here. Powerful Voices for Kids is supported by a grant from the Wyncote Foundation, the Verizon Foundation and the Byerschool Foundation.